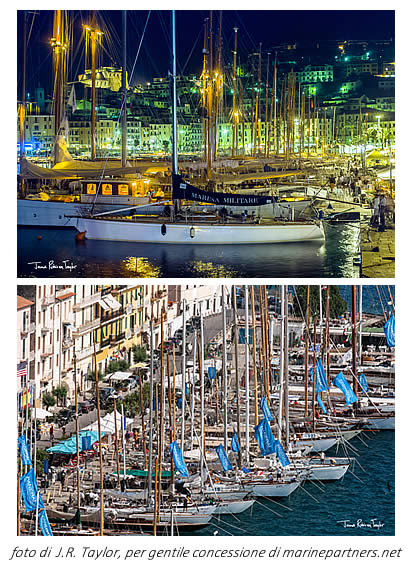 This year MediaTouch is the main sponsor of the 17th edition of the Argentario Sailing Week, the traditional meeting for classical and vintage sailing yacht organized by the Yacht Club Santo Stefano in collaboration with the maison of Florence of haute horology Officine Panerai.

There are over 50 registered boats that will sail in the Gulf of Argentario and beyond: in fact this year, for the first time, the competitors will have the opportunity to compete in the Vele d’Argento (Silver Sail), a coastal regatta with a course of about 80 miles, with departure on Wednesday June 15, which will wind through the islands of the Tuscan Archipelago including Giglio, Giannutri, Montecristo and Elba.

Among the “veteran” boats of the Argentario Sailing Week there will be Chinook (1916, Herreshoff), the first official member of the 2016 edition, on which Andrea Lo Cicero, former prop of the Italian rugby team and sailing amateur, and her sister ship Rowdy (NY49). Hallowe’en (Cutter Marconi, L 24.75 m, launched in 1926) and Eilean (Ketch Marconi, L 27.80 m, launched in 1937) on which the music video “Rio” by Duran Duran was shot anf owned by Officine Panerai will also be on the starting line.

On the other hand, these boats will make their debut in the Maremma waters: Enterprise, launched in 1939 and designed by Sparkman & Stephens, which participated in the Transpac from San Francisco to Hawaii before being transferred to Europe, Atrevido in 1968, designed by Olin Stephens, and Fjord III the 50-footer designed by German Frers Senior in 1946 to participate in the Buenos Aires – Rio regatta; the boat was built in just three months and Frers managed to win the regatta despite his departure with a delay of three days.

MediaTouch will be present at the Regatta Village with a stand.

Tuesday June 14 it will be possible to complete the registration for the Silver Sail and for the Argentario Sailing Week. On Wedsneday June 15 after the skipper briefing at midday, the contestants to the Silver Sail will sail to the Giglio and Giannutri islands.

Thursday June 16 registration for the Argentario Sailing Week will close and at night the award cerimony will be held at the Yacht Club Santo Stefano followed by a welcome cocktail. On friday morning the mayor of Monte Argenatorio will officially greet all the participants before the beginning of the competition that will be held from friday 17 to sunday 19.

On friday night the teams will enjoy a dinner offered by Yacht Club Santo Stefano at the Fortezza Spagnola di Santo Stefano and on sunday 19 the award cerimony will be held at the  Regatta Village.

The Argentario Sailing Week 2016 has been organized by the Yacht Club Santo Stefano with the sponsorship of Tuscany region, the province of Grosseto, the comune of Monte Argentario and AIVE (Associazione Italiana Vele d’Epoca) with the support of the Pro Loco di Porto Santo Stefano. Officine Panerai is the Title Sponsor, MediaTouch 2000 is the Main Sponsor. The other sponsors are: Argentario Approdi Spa. Technical sponsors: Slam e Argentarola srl. Official providers: Roman’s e Garden Vivai Mediterranei.